Some questions in football are strangely neglected, maybe because they are difficult, like this one about the causal impact of tactics.

Here are some excerpts from “Rethinking Football”:

❝Tactics talk is everywhere in football. We just assume that it matters. Journalists and bloggers write intricate pieces about tactics, even television pundits dip their toes into tactical waters, fans argue over back threes and false nines, coaches acquire cult status based on tactical reputations, beer-bellied kickers in the park worry about keeping their shape (on the pitch) and good hours go to waste in front of computer screens searching for the perfect formation in Football Manager. But how do we know that tactics make a difference? Just because we believe it does not make it true. Consider all the God talk in sport. When fans and players pray for supernatural help, I am quite sure that God does not make a difference to whether my Arsenal is winning or losing. Is believing in tactics real or another football faith?❞

I begin the essay by looking back at the military origins of tactics, from which football later borrowed many of its terms and concepts.

❝Soldiers were drilled to form line formations. For attackers, the goal was to break through the opponent’s formation and get in behind the lines. If a soldier moved too fast or became isolated behind enemy lines, he was considered ‘off the side’ and abandoned. Unless he secured a ‘pocket’ of space in hostile territory, then others could follow. The basics of soccer, rugby, American football and other team sports would be familiar to a soldier in the 18th and 19th century.❞

For long, military thinkers overestimated the role of tactics in warfare. In the 20th century, then, the focus shifted from tactics to strategy. In football, this represents the shift from coaching to the transfer market.

Do tactics matter? Ask anyone in the game and they will probably reply: Of course! Because sport teaches us to assume that everything matters.

❝Football thrives on absolute claims. Everything seems to matter all the time. Consider how riled up players, coaches and spectators get about a small event like a wrong throw-in at the half-way line. It stems from the competitive nature of the game. Motivational figures of speech like ‘giving 110%’ appear ridiculous, but they reveal the absolutist mentality built into sport. The driving desire is to reach an infinite goal; to be the absolute best. ‘No time for losers, ‘cause we are the champions of the world’, as the hymn goes. Arguing with the referee about a trivial throw-in comes from the same desire that compels footballers to chase after a lost ball even when, realistically, it makes no sense.❞

This way of thinking, however, makes for bad science.

❝One recurring theme in football absolutism is the false logic that if something could matter potentially it must matter in actual reality too. The wrong throw-in at the half-way line could have mattered, therefore it must have mattered.
Science looks for relative, not absolute claims. Not every part of football can count ‘110%’. Some things matter only 1%, if at all. Finally, and this constitutes the most difficult requirement, science seeks causal claims.❞

Think of causes as relative difference-makers.

❝To matter, something must hold causal necessity. In philosophy, a simple but persuasive way to capture causality is to think of causes as difference makers. A lot of things matter in general, yet only a few make a relative difference.❞

The emphasis on relative difference really matters, as this two-legs example demonstrates.

❝Having two legs matters greatly for a footballer. It is difficult to imagine a player with only one leg to reach the highest level. The causal link is obvious: running needs two legs. Even technique requires two; and be it as a standing leg while the other leg performs its tricks on the ball. Two criteria of science are fulfilled: having two legs matters empirically and it matters causally. Here comes the paradox, however. Since all top players have two legs, it no longer functions as a relative difference. The third criteria is not fulfilled. Once a player meets the minimum requirement of two legs, the issue loses importance. If something is necessary 100%, it is not a sufficient determining variable anymore. It drops out. Philosophers say it becomes constitutive rather than causal.❞

I will add more quotes later.

The full 7,500-word piece is part of my essay collection “Rethinking Football” which I am publishing as an e-book in progress on the Leanpub platform.

The first essay, “The Great Reduction”, considers the impact of the coronavirus pandemic. 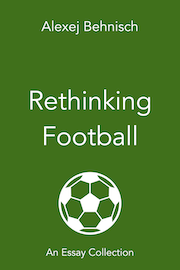