Germany has good regional rail. Not as great as Japan or Switzerland, but better than many in Europe.

But long-distance travel is a pain in the ass. Germans like their Autobahn fast, but their ICE slow.

When I’m in Germany, my most frequent connection is Köln/Bonn to Berlin.

So I was happy to hear that Deutsche Bahn will introduce a non-stop train between Köln (Cologne) and Berlin.

This ‘sprinter’ promises to reduce travel time to under 4 hours.

However, let’s consider an international comparison.

Madrid to Barcelona is about the same distance as Berlin to Köln.

Yet, instead of 4 hours, the non-stop train needs 2½ hours between Madrid and Barcelona.

The table below gives a summary. Data: Rome2Rio

Weep at the speed difference!

The normal Madrid-Barcelona train travels at 214 km/h, the non-stop at 242 km/h.

The German pair is about 100 km/h slower.

Even the proposed Berlin-Köln sprinter achieves only 140 km/h. Hardly high-speed.

The normal ICE, making several stops along the way, resembles a fast regional train at 117 km/h.

Fewer stops save some time. But the root cause of Germany’s sluggishness remains: the tracks are not built for high-speed.

The heavy-traffic section between Köln and Hannover is a particular bottleneck. 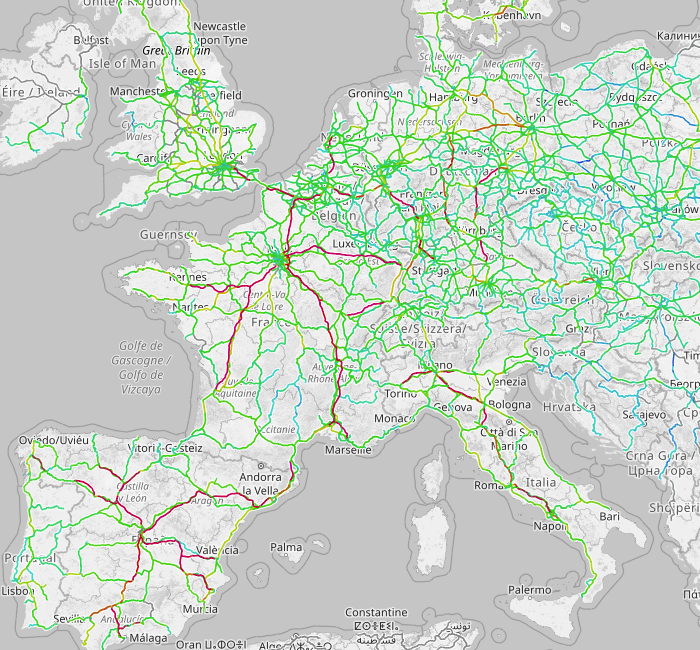 Germany has a dense network, optimised for regional traffic, but few rapid routes.

France and Spain struggle with their regional net. In long-distance high-speed, they are ahead.

Flights between Berlin and Köln/Bonn take about 1 hour. Add 1 hour before departure, 2 hours beats any other option.

(Frequent flyers know they can arrive 30 mins before boarding, reducing the journey to under 2 hours.)

Germany’s domestic flight market is strong, with many options and cheap tickets.

Before corona, per year over 1.6 million flew from Köln/Bonn to Berlin.

ICE trains are often late. I can’t remember ever arriving on time for Berlin-Köln. So much for German punctuality.

On average, prices are similar.

Regular rail customers with a BahnCard (a loyalty scheme) might even have the edge.

However, if you are flexible time-wise, it’s easy to get air bargains below train tickets.

People measure distances not in kilometres, but in time.

And travellers have limits, such as the 3-hour rule, as research has found out. (Average journey time is around 1 hour.)

After 3 hours, a sharp decline sets in. Anything longer is a niche market.

This rule applies to flying, car driving, and rail hikes.

Tourist operators and airlines know this and fight to keep schedules under 3 hours.

Rail needs to learn this lesson.

The key would be a new dedicated Köln-Hannover line. The extension to Berlin is already reasonably fast.

If Berlin-Köln had the same 242 km/h speed as Madrid-Barcelona, then non-stop would take 2h 16m; almost as fast as flying.

If, in addition, airlines finally had to pay tax on their fuel, rail would gain a clear price advantage.